We are interested in how complex quantum many-body systems are built up from single particles and how dimensionality and interaction strength affects the physical properties of a system. These are defining issues that arise in the description of many naturally occurring complex systems. Ultracold quantum gases allow us to create generic quantum systems with precise control over these relevant parameters: system size, interaction strength and dimensionality.

There are two independent experimental setups that both use ultracold gases consisting of lithium-6 atoms. One of them investigates 1D and few fermion physics (the few fermion setup) and the other one is dedicated to exploring 2D systems and optical lattices (the 2D lattice setup). 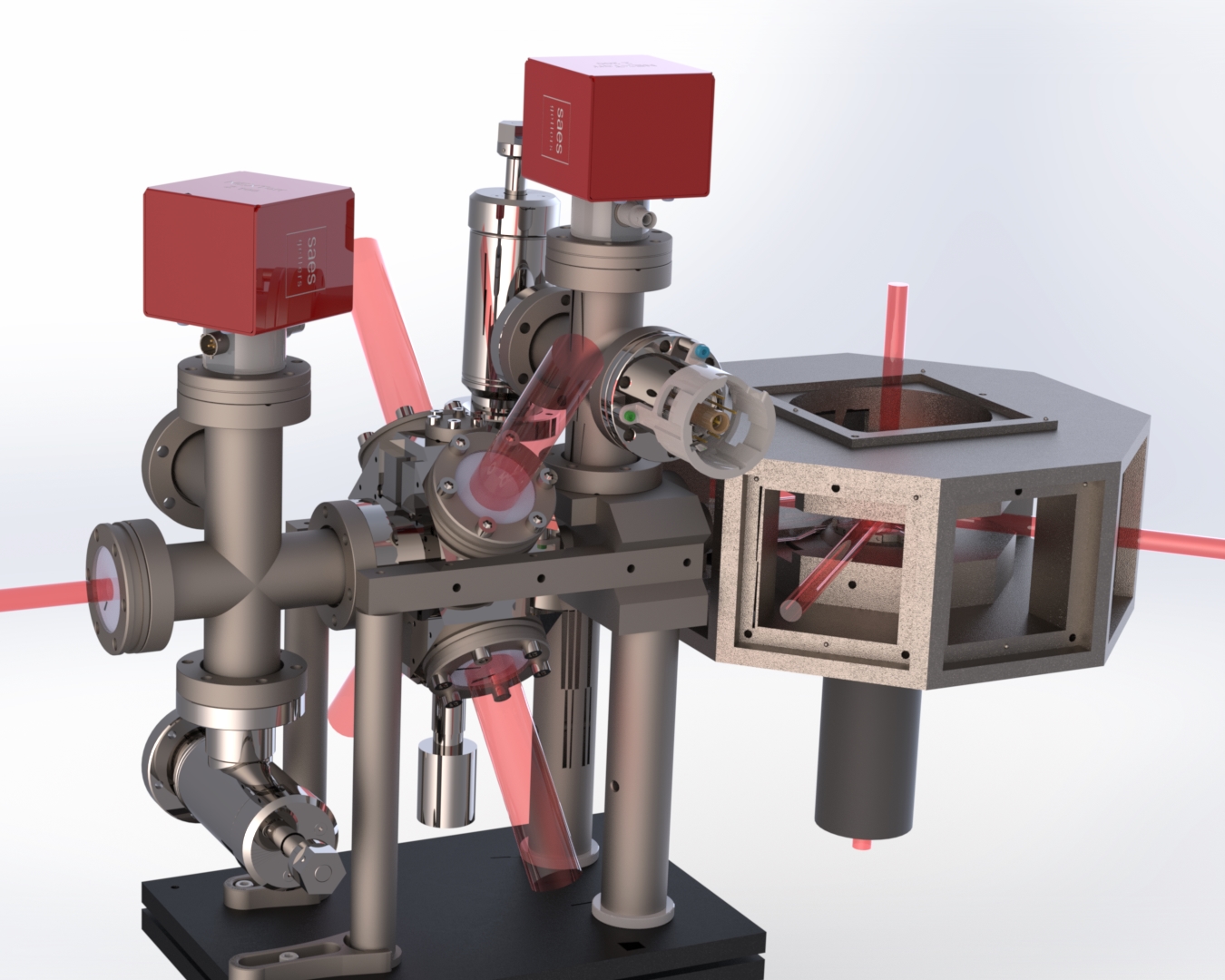 The project is a joint effort by Professors Selim Jochim, Matthias Weidemüller and Philipp Preiss. Construction of the experiment began in the fall of 2019 and several thesis projects at the Bachelor, Master and PhD level are available (see Open Positions ). Interested students should contact Selim Jochim , Matthias Weidemüller, or Philipp Preiss .

The goal of this projects to study the transition from microscopic to macroscopic quantum systems. We investigate this transition by preparing the smallest realization that contains the relevant physics and then gradually increase the size of the system.

Few Fermions in an Optical Microtrap:

As a starting point, we deterministically prepare samples of few fermions in a single potential well with full control over the number of particles and their quantum state (see Serwane et al., Science 332, 336 (2011)). We load atoms in a small volume optical trap, the so-called microtrap. By precisely controlling the depth of this trap we can determine the number of particles that should remain in the microtrap.

In this microtrap, we investigate the physics of two distinguishable fermions and show that if they repulsively interact with each other with infinitely large strength, they behave according to Pauli’s exclusion principle although they are not identical particles (see Zürn et al. PRL 108, 75303 (2012)). With the preparation of more than two particles we investigate the pairing of even atom numbers at attractive interparticle interaction (see Zürn et al. PRL 111, 175302 (2013)). Our ability to increase the number of atoms in our few fermion systems one by one, allowed us to study the transition from few-body to many-body physics. For this, we prepared a single impurity atom that probes a growing number of majority atoms. In this quasi one-dimensional system we find that the the many-body limit is already approched with as few as four majority atoms (see Wenz et al., Science 342, 457 (2013)).

With our experimental setup we are also able to generate several microtraps next to each other. Thereby we can create a larger and more complex potential landscape in which the atoms can move and interact. We demonstrated the first step on the way to a macroscopic periodic system by creating its fundamental building block: a double-well potential filled with two particles (see Murmann et al., PRL 114, 80402 (2015) and the viewpoint article by Kaufman et al.).

In the next step, we want to merge several double wells and thus create a larger system from the fundamental building block in a bottom-up approach.

In this project, we take a different approach to studying the physics of quantum many-body systems. The idea is to start with a bulk gas of fermionic atoms and move towards smaller and more discrete systems with tunable geometries.

One of our primary goals is to understand how the phase transition of a bulk system is affected by the dimensionality. In particular, we are interested in the two-dimensional case where fascinating effects have been predicted. A very prominent example is the theory of Berezinskii-Kosterlitz-Thouless which provides a framework for describing a variety of phenomena in 2D such as spin ordering, magnetism and superfluidity (see reference). In the context of bulk systems, a striking prediction of this theory is that the correlations of the low-temperature phase decay like a power-law with a universal exponent at the critical temperature. We are also interested in studying the phase transition in the regime of strong interactions across the 2D BEC-BCS crossover.

Figure: Illustration of the 2D setup and the measured in-situ density and momentum distribution

To investigate such phenomena, we prepare an ultracold Fermi gas and tune the interparticle interactions using a Feshbach resonance. We reach the 2D regime by confining the gas in a highly anisotropic potential which is much more tightly confining in one spatial direction. We measure the density distribution of the atoms in the trap and can also access the momentum distribution of the sample (see figure and Murthy et. al., PRA 90, 43611 (2014)). These distributions contain information about the state and the spatial coherence of the many-body system. The first result of this project was the observation of condensation of fermion pairs across the so-called 2D BEC-BCS crossover (Ries et al., ArXiv:1409.5373 (2014)).

Starting from the bulk 2D system, we will move towards studying lattice physics. In particular, we are interested in exploring the Fermi-Hubbard model in a 2D lattice. In a first step towards this goal, we load the 2D sample into an optical lattice which is superimposed to the 2D sample.

In the future, we want to move towards studying 2D physics with quantum gases in tunable potentials. We are currently implementing a setup to holographically project tailor-made potentials onto the 2D gas plane. For this purpose, we use a liquid crystal spatial light modulator (SLM) and make use of a high-resolution objective to project the potential. We have already successfully implemented the necessary algorithms to compute the phase patterns and we will soon implement the SLM into our main experimental setup.

Making use of the small sample sizes in our few fermion setup, we could significantly improve the measurement accuracy of the lithium dimer binding energy close to the broad Feshbach resonance at about 830 Gauss. In collaboration with theorists, this allowed us to determine the lithium-6 scattering length as a function of the magnetic field with significantly improved accuracy (see Zürn et al. PRL 110, 135301 (2013)).